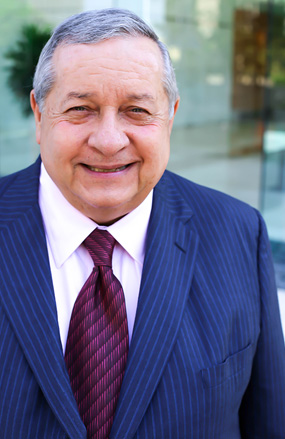 Federico Castelan Sayre is a nationally recognized trial lawyer. He has been trying cases for the past 40 years and has tried over 200 cases to verdict. He practices in the areas of Civil Rights litigation, mass toxic tort, wrongful death, complex commercial litigation, employment law and serious personal injury. He handles criminal matters of significance, including Capitol Cases and white collar criminal cases. While Mr. Sayre’s primary practice is in California State and Federal Courts, he has handled cases in Washington, Oregon, Arizona and Nevada, just to name a few. Mr. Sayre is a frequent lecturer and panel member in various areas of civil practice. He is the past president of the Hispanic Bar Association of Orange County. He is the only person to have been designated as Outstanding Hispanic Attorney in Orange County (by the Hispanic Bar Association) and the Benito Juarez Outstanding Attorney in Los Angeles County (by the Mexican American Bar Association).

Mr. Sayre received his Bachelor of Arts and Government Degree in 1969 from the University of Arizona. While at Arizona, Mr. Sayre was listed in Who’s Who in American Colleges and Universities and was the founding member of the Mexican-American Liberation Committee.

Mr. Sayre received his Juris Doctorate from Boalt Hall School of Law at the University of California, Berkeley. He was Chief Note and Comment Editor of the California Law Review while at Boalt. Mr. Sayre also attended Princeton University where he was a Woodrow Wilson Fellow at the Woodrow Wilson School of Public and International Affairs. He received a Masters in Public Affairs from Berkeley University in 1971. While at Berkeley, he was the Founder and Director of the “Migrant Legal Services Program.” He has a long history of involvement in groups that work to improve conditions within the Hispanic community. Mr. Sayre is bilingual in English and Spanish.

Mr. Sayre also received a research grant from the National Endowment for the Humanities, where he conducted research on the subject of “Future Alternatives for Farm Workers in Response to Technological Change in Agriculture.”