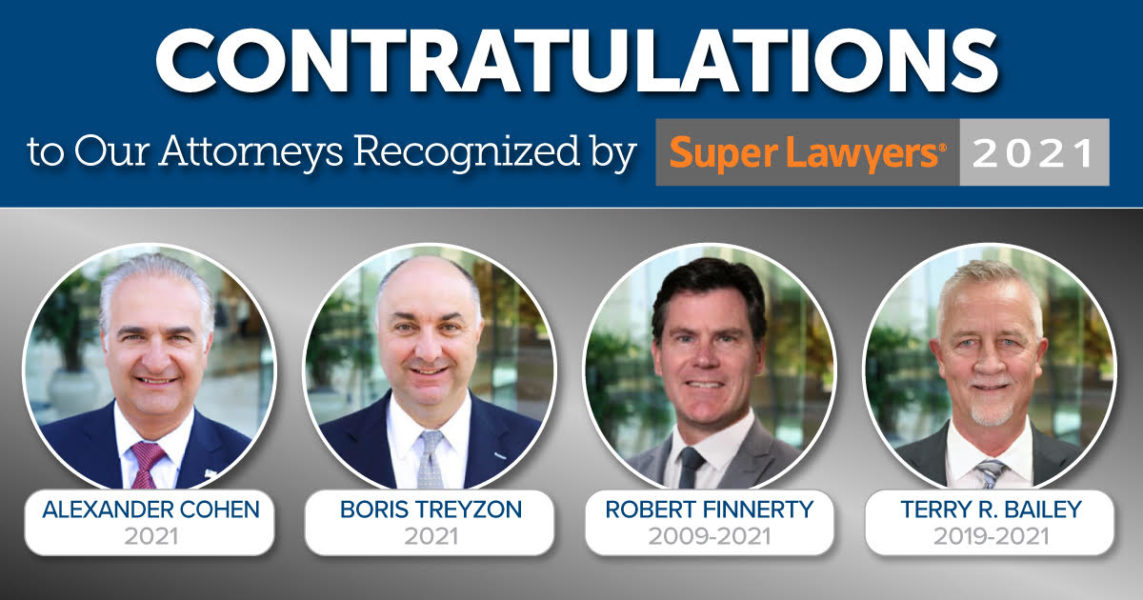 ACTS Law is pleased to announce that four of its lawyers were selected for the 2021 California Super Lawyers list. The list recognizes outstanding lawyers in various fields as nominated by their peers. This year’s latest entries to the list are partners Alexander Cohen, Boris Treyzon, Robert Finnerty, and Terry R. Bailey. For Cohen and Treyzon, this represents their first time earning this distinction, while Finnerty and Bailey have been honored multiple times before.

The opens in a new windowSuper Lawyers list is an annual honor that recognizes the hard work performed by all the honorees. To be named to the list, a lawyer must first be nominated by their peers before going through a multi-step process. Part of the process involves examining aspects of a lawyer’s work, including their performance in the courtroom, their standing with their firm, and their work in their community.

In the end, only about five percent of those nominated are selected for the Super Lawyers list. The list is meant to provide a comprehensive resource of well-qualified lawyers for those looking for skilled legal help.

For Cohen, this represents the first time that he has been named to the prestigious Super Lawyers list, which has recognized him for his work with clients who have suffered property damage and need financial relief. Cohen represents individuals, business, and commercial property owners who have been denied payments or have been underpaid by their insurance companies. Cohen’s reputation among insurance companies and defense counsels is exemplary.

Cohen is a longtime consumer advocate and has focused on the representation of policyholders in insurance bad faith and insurance coverage matters since 1999. His career has opened new opportunities, including hosting his own radio show. His program on 670AM has run since 2013, and he regularly appeared as a guest on 790 KABC as well as on industry-specific podcasts.

Cohen was a founding partner of ACTS Law in 2013. Prior to that, he worked at his own law firm, Alexander Cohen & Associates, in which he was also a founding partner. The firm became one of the largest property insurance bad faith practices in California.

Cohen, a Southern California resident since 1979, attended California State University, Northridge, graduating with a degree in psychology in 1992. He received his Juris Doctor degree from Kensington University School of Law and was admitted to the State Bar of California in 1999.

Cohen is admitted to practice in State Courts of California, as well as U.S. District Court and Court of Appeals. He is also a board-certified umpire and appraiser in California and a member of the Insurance Appraisal and Umpire Association (IAUA). He served as the Chairman of the Insurance Bad Faith Litigation Group at the American Association for Justice (AAJ) from 2017-2020. He currently serves as one of six national co-chairs of the Business Interruption Litigation Task Force at AAJ, litigating against insurance companies for losses stemming from business closures and shut downs due to Covid-19 and government closures.

This is the first time for Treyzon to also be named to the Super Lawyers list. He has been recognized for his tremendous work with both individuals and businesses in complex litigation matters, catastrophic personal injury cases, and insurance bad faith.

In his tenure with ACTS Law, Treyzon has successfully secured numerous multi-million-dollar verdicts and settlements for his clients. He also successfully defended cases involving business and contractual disputes. He works with his clients through every step of the legal process.

Treyzon has a track record that speaks for itself when it comes to unwinding  large, complex cases. He fights to secure the best results for personal injury victims. He has worked tirelessly for his clients all through his career.

Mr. Treyzon’s 20 years of legal experience began when he earned his Juris Doctor in 1997 from the University of La Verne School of Law. He is admitted to practice in State Courts of the State of California, as well as U.S. District Court.

Finnerty has been selected to the Super Lawyers list each consecutive year since 2009 for his work in the areas of product liability, catastrophic personal injury, toxic torts, and insurance bad faith. Over his career, Finnerty has become well known among not only his fellow attorneys, but also the judges he has appeared before as a skilled, aggressive, and steadfast trial lawyer.

Not only has his work been consistently recognized by Super Lawyers, but also by two separate invitation-only trial organizations, which recognize the highest achievements in trial advocacy, professionalism, and civility.

Finnerty’s tenacious attitude in the courtroom has demonstrated itself in his accomplishments, as he has brought over 75 trials to verdict as an advocate of the American Board of Trial Advocates. That commitment toward his work comes from his desire to achieve the best possible outcome for his clients. His passion has been rewarded, as he has won verdicts and negotiated settlements that have recovered more than $1 billion for his clients. Among his most prominent cases are a $510 million Class Action consumer fraud settlement, $132 million chemical exposure settlement, $90 million Toxic Tort settlement, $60 million settlement in toxic tort, a $59 million settlement for burn injuries, $59 million breach of Fiduciary Duties, $53 million burn settlement, $31 million environmental settlement, $30 million Toxic Tort settlement, $30 million environmental settlement, and a $3.7 million verdict for a defective design lawn mower.

Finnerty’s success in the law has not only won him the admiration of his colleagues but has also translated to numerous professional awards. His accolades include an AV rating by Martindale-Hubbell, and Forbes named him a top litigator.

Bob earned dual Bachelor of Science degrees in political science and psychology. He earned his law Degree from Pepperdine University School of Law,

Where he was a member of Phi Delta Phi. He is an Advocate in the American Board of Trial Advocates and a Fellow in the International Academy of Trial Lawyers. Both invitation-only groups advance the rule of law and protection of the right to trial by Jury.

Bailey has been consistently named to the Super Lawyers list each year since 2019 for his outstanding work with homeowners and homeowner associations. Throughout his career at ACTS Law, Bailey has worked as a plaintiff’s lawyer representing his clients in cases that involve property damage. These cases include construction defects, insurance bad faith, inverse condemnation, landslides, floods, and fires.

Defendants typically include developers, general contractors, specialty contractors, governmental entities, and adjoining landowners. Bailey has been successful for his clients, regardless of which side he represented. He has worked to recover more than $100 million for plaintiffs in construction defect, insurance bad faith, and other property damage actions.

Bailey’s enthusiasm for representing clients in property damage cases stems from his career before he became a lawyer. He worked as a general contractor and spent years working in the family business. He was able to take the experience and knowledge that he collected in that career and carried it into his next one. His background is useful when he is working with consultants and experts during a case. They work together to determine the cause of the damages, the appropriate scope of repair, and the cost of those repairs.

ACTS Law is proud of its honorees recognized by Super Lawyer and our entire legal team that work hard for our clients. We are trial tested and zealous advocates for the rights of our clients. If you need legal assistance, please contact us online or call us at 833-ACTS-LAWopens phone dialer. Our offices in San Diego and Los Angeles are ideally located to assist clients in Southern California.