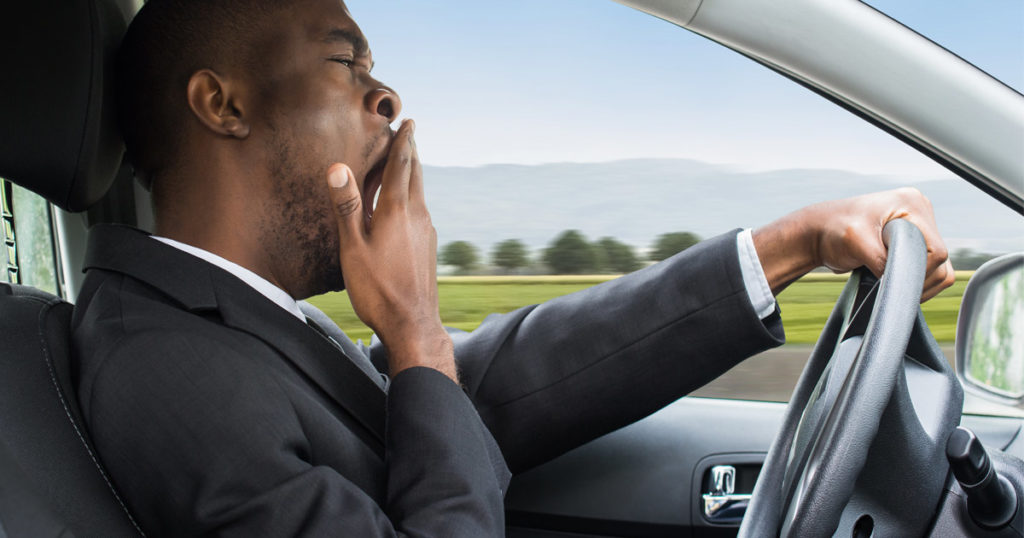 When it comes to dangerous driving behaviors, drunk/impaired driving and distracted driving are probably the first things that come to mind. However, drowsy driving can be just as dangerous, and it is alarmingly common. According to a survey by the American Academy of Sleep Medicine (AASM), close to half of all Americans admit that they often struggle to stay awake when driving. This can be extremely dangerous for the driver, as well as other passengers in the car and other motorists in the vicinity, particularly if the drowsy driver falls asleep at the wheel. Although drunk/impaired driving can be proved using a breathalyzer test, and police can check a driver’s phone to confirm that he or she was sending a text at the time of an accident, there are no laws that prohibit drowsy driving, and it is difficult to prove. There are steps motorists can take to stay awake and alert when driving or avoid other motorists who may be showing signs of drowsy driving.

Drowsy driving is more common than people might think. According to the opens in a new windowNational Highway Traffic Safety Administration (NHTSA), each year, there are roughly 100,000 car accidents that are caused by drowsy driving. These accidents cause approximately 71,000 injuries and 1,500 fatalities that could have been avoided if the driver recognized that they were feeling drowsy and avoided getting behind the wheel. Too often, people do not take drowsiness seriously, yet it can have a significant impact on a driver’s ability to keep their attention focused on the road, and it can slow drivers’ reaction times if they need to brake suddenly or avoid hitting another vehicle. Studies have shown that drowsy driving can be just as dangerous as impaired driving. In fact, motorists who drive after being awake for 24 hours can have the same impairments as having a blood alcohol content (BAC) of 0.10 percent, which is over the legal limit.

Victims of car accidents caused by a drowsy driver are urged to contact an experienced catastrophic injury lawyer for assistance.

Motorists at the Greatest Risk for Drowsy Driving

Any motorist who gets behind the wheel after getting too little sleep and who is showing signs of drowsiness is at risk of causing a drowsy driving accident. However, the following individuals are more likely to drive drowsy:

Drivers who experience any the following signs should avoid driving until they are able to catch up on sleep, and feel awake and alert:

How to Avoid a Drowsy Driving Accident

In addition to being aware of the common signs of drowsiness and avoiding driving if experiencing any of those signs, there are some simple steps drivers can take to prevent drowsy driving, including the following:

Why Does Drowsy Driving Remain Such a Serious Problem?

There are a number of reasons why drowsy driving continues to cause thousands of accidents that result in serious injuries and fatalities, as well as significant property damage, including the following:

Drowsy driving may be considered reckless driving in the following circumstances:

Ultimately, drowsy driving car accidents are completely preventable. By getting enough sleep or refraining from driving if motorists feel fatigued, these accidents can be avoided. Drivers who fail to take the appropriate precautions and get behind the wheel, even when they feel extreme fatigue, can face harsh penalties, including fines, suspended license, and even jail time. The victims of drowsy driving car accidents may be eligible for financial compensation, including the following:

California does not impose limits on the amount of financial compensation an individual can claim in a personal injury lawsuit. In addition, there is no cap for non-economic damages, except for the following circumstances:

If you have been seriously injured in a car accident that was caused by another motorist who was driving while drowsy, do not hesitate to contact the Los Angeles car accident lawyers at ACTS Law. It can be difficult to prove that a motorist was drowsy at the time of the accident, but we will thoroughly investigate the details of the case, including whether the motorist was coming off of a long shift, or if he or she was taking medication that could cause drowsiness, and hold that person responsible for your injuries. We will protect your rights and assist you in claiming the compensation you deserve. To schedule a free, confidential consultation, call us today at 833-ACTS-LAW opens phone dialeror contact us online.

With offices in San Diego and Los Angeles, we serve clients throughout Southern California.